When the truck rounds the corner, it’s just another truck1 until we see the billowing cloud of DDT2 trailing behind. Fog Man is coming! Across the street, our neighbors shout, “Hey, where’d you go?  We can’t see you!”  Of course they can’t; we can’t see them either. Neighborhood dogs bare yellow teeth, bark at the truck, chase it down the street, their frightful yaps trailing off like the smoke itself. There was once a town in the heart of America where all life seemed to live in harmony with its surroundings.3 In a burst of youthful indiscretion, I run toward the thick white vapor, stop at its fraught edge, and deeply inhale.  Ugh, it smells like boiled beets, my least favorite vegetable.4 I stop because I am Chicken, the name I have been given by the boy who lives down the street, the one who likes to tease.5 Chicken: because I cannot will myself to step into the fog bank. Chicken: because I will not do what he asks me to do, which is to follow him.  Instead, I stand on the curb and watch him and his green metallic Stingray6, with banana seat and sissy bar, plunge into the sea of haze, an ace of hearts attached to his back wheel flapping against his spokes, thub-thub—thub-thub—thub-thub, gaining speed, like our hearts, thrumming7 after Fog Man, come back, come back, come back!

1 Join in the chase of a fogging truck here.

2 The scientific name for DDT is 1,1,1-trichloro-2, 2-bis-(p-chlorophenyl) ethane. The chemical formula is C14H9Cl5. The DDT molecule looks like this:

3 The first sentence of Rachel Carson’s seminal environmental bestseller, Silent Spring. Carson, my personal hero, brought national attention to DDT, leading to its eventual ban. She did not sugarcoat the truth of what the pesticide could do to an organism’s health: “If swallowed, it [DDT] is absorbed slowly through the digestive tract; it may also be absorbed through the lungs. Once it has entered the body it is stored largely in organs rich in fatty substances (because DDT itself is fat-soluble) such as the adrenals, testes, or thyroid. Relatively large amounts are deposited in the liver, kidneys, and the fat of the large, protective mesenteries that enfold the intestines” (Silent Spring, First Mariner Books edition 2002, p. 21). In 1964, at the age of 56, Carson died of cancer.

4 In its pure form, DDT is a white, crystalline powder that resembles table salt and has little odor. In the mid- to late 1950s it was used to eradicate mosquito populations. Some people who liked to chase down fogging trucks recall the distinctive odor of DDT as being somewhat akin to the smell of boiled beets, an unpleasant odor at best. If so, why did so many of us seem to enjoy running after the truck? I remember a sweet-smoky smell, though I could be wrong. Beets are not exactly my “least favorite vegetable,” but neither are they my favorite.

5 His name was Johnny, and he had blonde hair and resembled Dennis the Menace, which was one of my favorite TV shows, except this Johnny could be menacing without the cuteness. His parents and my parents were good friends; they often had cocktails together after work. Johnny and I were only children. Years later, his parents and my parents died of cancer.

6 The Stingray bicycle was manufactured by Schwinn from 1963 to 1981. It was the coolest bike a kid could own. 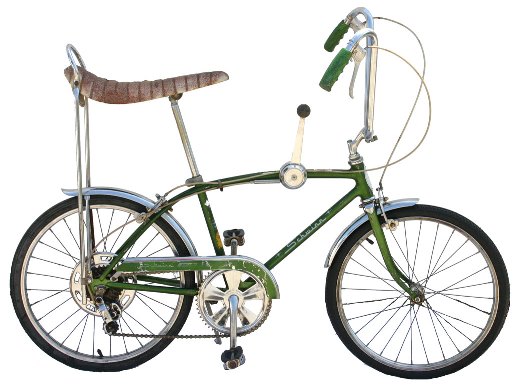